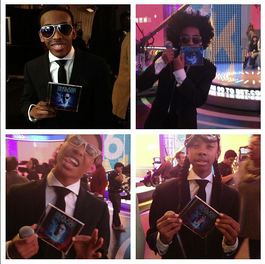 Mindless Behavior is an American boy band, best known for the singles "My Girl" and "Mrs.Right, produced by Walter Millsap. The band was put together in Los Angeles in 2008, by Keisha Gamble and Walter Millsap (who has previously worked with Beyonce and Timbaland) and Vincent Herbert (Lady Ga Ga, Tony Braxton), and the band trained in dance and singing for two years before releasing a recording.

The group's debut studio album was released on the September 20, 2011. It debuted on the BillBoard 200 album chart at # 7. Mindless Behavior toured with (Back Street Boys, Justin Bieber and Jason Derulo, and also Janet Jackson) who they open for Janet's sole opening act for the 2011 tour. Mindless Behavior also headlined the first bets Closer to My Dreams Tour along side (Diggy Simmons, Lil Twist, Tyga, Trevante and Jawan Harris). Mindless Behavior is currently headlining the SCREAM Tour with, Diggy Simmons and featuring The Oh My God Girls, Jacob Latimore, and Hamiliton Park. They have been predicted as Future Stars by This Must Be Pop.

In 2012, the band was on their own first headlining tour, Number 1 Girl Tour, after finishing their European tour. They also have a web-series, Mindless Takeover on You tube, from Awesomeness TV. As of March 2013 was the MB Takeover because the band had released their sophomore album called, "All Around the World" on March 12, 2013 to show how much the boys have matured over the years. The band's first theatrical documentary film, "Mindless Behavior: All Around the World" which was to be released in theaters on March 15, 2013 at, AMC Theaters, independently and was produced and distributed by Awesomeness TV Films. After the album and film's release, MB is getting ready for the "All Around the World Tour" and are filming a movie with Mike Epps called "Bad Behavior".

Add a photo to this gallery
Retrieved from "https://mindlessbehavior.fandom.com/wiki/Mindless_Behavior?oldid=13999"
Community content is available under CC-BY-SA unless otherwise noted.